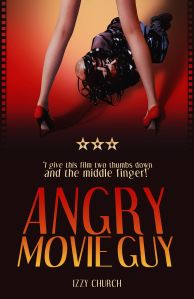 I was one of the lucky readers who was given a free book by the author and for that I am really both happy, glad and grateful. I have always had a thing for romantic comendy books, after a long and stressful day at work I find it relaxing to sit on my couch and have a good laugh. This book gave me a good laugh and at the same time made me fall in love with the characters. The author has her way around words that brings the character to life. Reading through the pages made me feel as if I was right there with the characters, witnessing what was happening. This is one of those books that makes you think, feel, cry and laugh along with the characters. I’d hate to giveaway anything because I think readers should go through the same rise and fall of emotions as I did but this book is about a struggling film critic whose torn between fame and the woman he fell in love with. This is a great book and I am definitely recommending this for everyone to read.

Charlie was a movie critic, a very grumpy movie critic. He wasn’t always a out spoken jerk, he was a nice guy but he got sick of being taken advantage of. He had hallucinations of himself out of his body and of his dream girl. Then his dream girl becomes reality, and he just so happens to totally ruin any chance of ever having her in his life. Now the challenge is on and he is going to win her back in his life. But could he have gone too far for her to forgive him?

This was an interesting read. If you are looking for a light-hearted rom-com, this will tickle your funny bone. I laughed out loud with some of the comments he made, I had to explain to my husband what was so funny. I think that Ms. Izzy Church’s writing was easy to follow, it was my first read for her and I enjoyed it.

Charlie was a little off his rocker but that’s what made his character. You find yourself relating to him and understanding exactly why he is the way he is. I did get a little confused with Astral Charlie’s presence and I wasn’t really sure as to how he helped the situation but he didn’t take away from the story. Charlie was a closet hopeless romantic though and all he wanted to do was woo the girl of his dreams into his arms but instead he unknowingly pushed her far, far away from him. Poor poor Charlie! He seems like such a sweet obnoxious guy.

There were no sexual parts to this story just kissing and talking but there is a little language. 🙂

This is an interesting take on a love story, let’s call it critically ironic romance. Angry Movie Guy is, as you may have guessed, about a movie critic. And like many critics today, Charlie “The Snake” Evans (Zimmerman) is rather rude and flippant, often not having any concern about how his review will come across to or affect those he criticizes.That is until he unwittingly annihilates and demeans the woman, Alex (Alexis) Rasner, he is falling in love with.

Charlie has dreamed of being a well-known movie critic since he was young. After attending college to obtain his degree and pounding the pavement non-stop in search of someone to take him on. He was ready to give up until the day he caught a break, an angry review was printed in the paper. An acquaintance of his father’s saw it, and took the bull by the horns – or the snake by the tail – and created the Angry Movie Guy. Charlie Zimmerman became known as the Charlie “The Snake” Evans and the Angry Movie Guy who went from a media stunt to get people to watch the news to a man with a show of his own. Quickly rising to fame, much like his mother Evelyn Zimmerman did in pictures many years before.

Charlie’s mother had passed on suddenly when he was a young boy and his father took it very hard. Barely able to take care of himself, his father Ray, sent Charlie to live with Aunt Hilda. Hilda was eccentric and Charlie didn’t have the happiest of childhoods which left him with a very sour taste for life and helped in creating the Angry Movie Guy persona. Charlie loved his mother and missed her dearly only wanting to make her proud, though he found himself in a place in life that she would not be very proud of. He didn’t know how to change it or where to go.

That is until he met the woman of his dreams at the showing of his favorite movie. He was awestruck to the point that he didn’t get her name or number, let alone have the chance to her his. He was beginning to believe she was a hallucination and didn’t really exist. That is until he ran into her again at the premier of an indie film he was critiquing. This time he was able to give her his business card before completely flaking out and running off, again.

Charlie’s viewing of this indie film had not gone as expected. He did not have a reserved seat and was forced to sit between two larger woman that didn’t leave him room to breathe. Then the muscle head behind him threatened to pound in his head if he didn’t shrink down in the seat. And to top it off his favorite jacket got stuck and ripped before having soda spilled down the front of him. It seemed that maybe the poor guy was getting back a taste of his own medicine, especially since it was after this experience he ran into the woman of his dreams and didn’t stick around long enough for proper introductions. If he had maybe he wouldn’t have been as rough as he was the next day giving his review of the indie film.

It just so happened that the film he shredded to pieces was written by Alex Rasner, better known as Lexi, the woman of Charlie’s dreams. In his rant of slander Charlie referred to the “man” who wrote the movie by a multitude of horrible names, his ranting and raving continued the entire show and he never let up. Getting all his aggression out on the film that he actually felt for the situation he was in, never did he think he was shoving his foot and the rest of his body past his mouth and down his throat.

Now Charlie had to find a way to win back the woman he loved, but had no idea where to start. Would he be able to overcome the persona? Would she allow him the opportunity to explain himself? Or was he doomed to simply be the Angry Movie Guy, forever?

The way the author wrote the story was a twist on the comedic romances that are so prevalent today. The use of Charlie’s ethereal self and his dreams to help fill in the background was a touch of genius. I give this film two thumbs up and two middle fingers…what do I mean by that? Well read the story and you will find out.